INVESTIGATION… Kaduna community where children learn under trees, with no facilities despite N160m budget for classrooms

Despite the state’s recent declaration of free education for kids in primary and secondary school in Kaduna State, a community still hosts a school that scares children from wanting to attend school. Though funds have been budgeted for classrooms and facilities for them, they still learn under trees with no facilities for convenience. Patrick Egwu visited and reports.

It was 2:45 p.m. and the afternoon sun had just began to settle. School children of LEA Primary School, Anchau Gari, are in the football field having a fun time. At the middle of the field, the boys, more than 20 of them were playing football. Few meters away under an umbrella tree, the girls formed a circle and tossed around dotted lines on the ground in excitement. Located in Kubau LGA, more than 2 hours away from Kaduna, the state capital, the school is one of the public schools in the state.

However, the school is in a deplorable condition with the absence of infrastructure and classrooms to accommodate the growing number of pupils who come from different parts of the community to learn.

“I want to be a doctor,” Sadik Umar, one of the pupils playing in the field says.

Umar is 9 years old and his dream of becoming a medical doctor might be jeopardized if adequate provision is not made for a conducive learning experience. He shares a classroom with 150 pupils – a classroom which should ordinarily take 40 – 50 pupils.

Presently, the school which was established in 1976, has 3,150 pupils and 20 teachers using a block of five classrooms with inadequate facilities that can barely accommodate 1500 pupils. During school hours, the pupils learn in over-crowded classrooms while those who couldn’t be accommodated are gathered under a mango tree to learn. 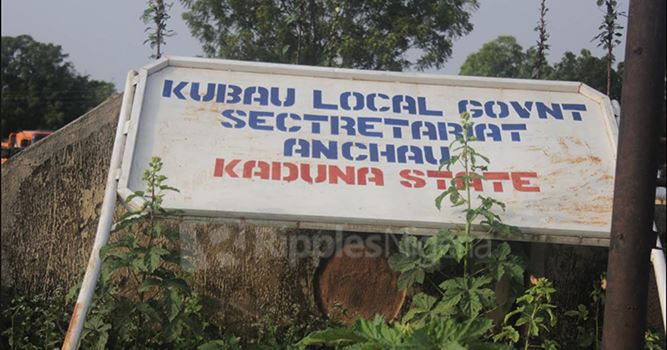 In 2016, a contract for the construction of a block of 24 classrooms, office spaces and toilets was awarded for N163,165,945.97. The contract was awarded to Parkmore Construction Limited with a set completion date of 32 weeks. The project was part of the Universal Basic Education Commission (UBEC) intervention programme in states across the country in collaboration with the State’s Universal Basic Education Board (SUBEB). The SUBEB in Kaduna state according to UBEC, is expected to provide counterpart funding to enable them access the UBEC grants.

In October 2018, construction works started at the school where the new classroom blocks would be located, but it was abandoned two months after, due to lack of payment by the state government, according to the contractor. An observation around the project site shows that only the ground floor of the proposed two-storey building which is expected to have 8 classroom blocks has been constructed. Since it was abandoned, the constructed part of the building has been water-logged and overtaken by miscreants who use it as a hideout and a place for defecation. 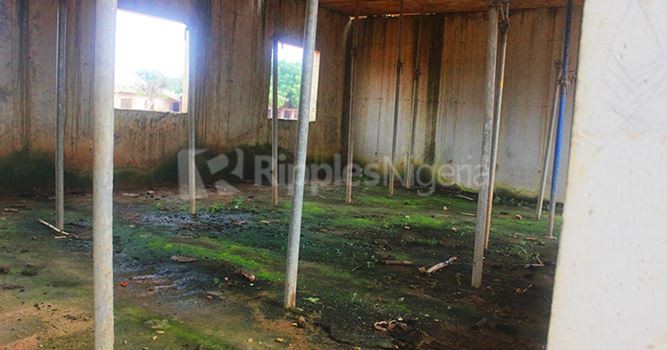 Goma says since the building was abandoned, it had turned to a hideout for miscreants in the community.

Due to unavailable classroom spaces for the pupils, the teachers at the school resort to using the shades under trees as make-shift classrooms to teach the pupils. In the open spaces, the pupils sit on the ground, their writing materials on their lap as they look up to see what their teacher is writing on a wooden board hung by the side of the tree.

“We have a large number of students but we don’t have enough classroom spaces to accommodate them,” Shehu Goma, the head master of the school said. “It is not just enough for us and the new one is not yet completed and it is affecting our pupils in terms of their learning experiences.”

Goma adds: “We pack the pupils together in classes so that they can stay and learn and you know this affects the way they learn and limits the teacher’s ability to monitor their progress,” he says. “We gather the nursery classes under the tree then the primary ones who are older in classes.” 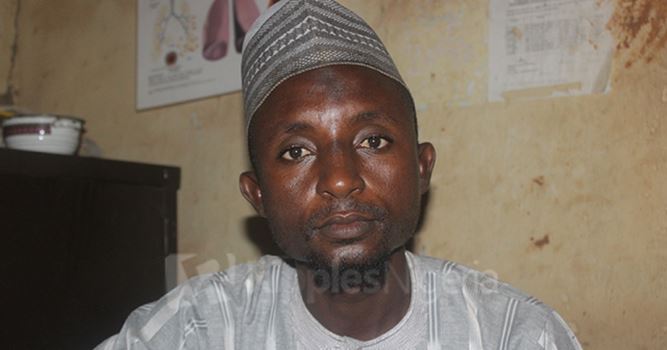 Goma who assumed duties as the head master of the school in April 2018, says he feels bad about the condition of the school but adds that he cannot do anything about it as he is under the government’s payroll.

“In a system that works, learning should take place in a conducive environment and not like we have it here,” he says. “But the state government visits us from time to time and says that the project would be completed soon.”

An observation around the school shows that the school does not have perimeter fencing too, and this poses security threats to the pupils and staff. Also, there are no toilets for the pupils. The two blocks of toilets which were built many years ago are in deplorable conditions and unusable, surrounded by bushes. 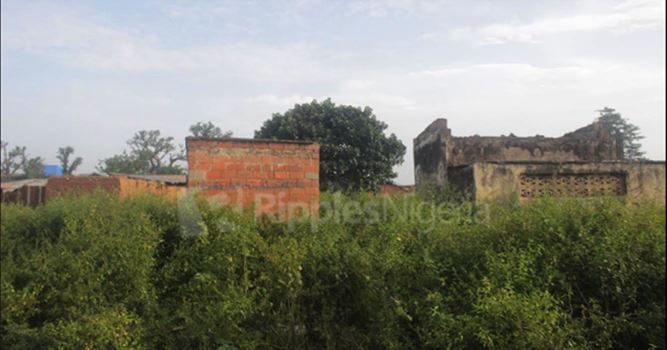 The block of toilets

“They use the bush whenever they want to go to toilet because there are no clean toilets for them to use,” Mammah Nasiru, a teacher at the school said. “This one here has not been used for many years now and if you look around you would see that it is in a very bad state. We don’t want our students to be bitten by snakes because they want to make use of this facility.”

Investigation shows that Kaduna state government has not yet accessed the 2017 and 2018 UBEC matching grants. Data obtained from the UBEC website shows that a total of N2,268,898,415.02 is yet to be accessed by the SUBEB in the state for intervention on public schools in the state in the two-year periods. Also, the document shows that another N614,097,020 has not been accessed by the state as at July 22, 2019.

However, Kaduna state is not alone. In 2018, the UBEC released a report titled “Unaccessed Matching Grant” showing that 24 states have not yet accessed over N47 billion education grants for their states between 2015 and 2017. 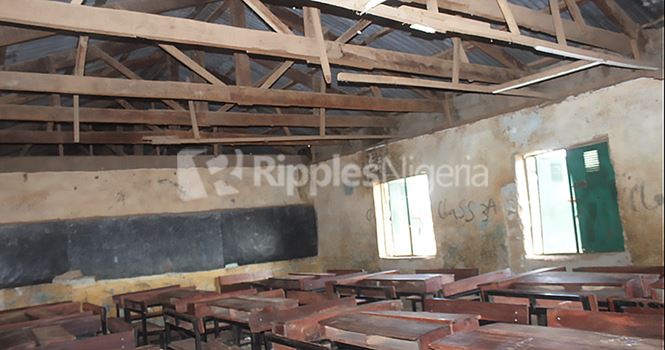 Inside one of the classrooms

The UBEC fund constitute 50 percent of the gross revenue realized by the Commission in a preceding year meant to be disbursed to states in accordance with a sharing formula approved by the Federal Executive Council. On their part, states are expected to provide an equal amount of the money as counterpart funds to be able to access the funds.

The school project at Anchau which was awarded in 2016, was not started until two years later because the state was yet to pay their own counterpart funding in order to access the UBEC grant.

Dauda Ahmed, a tracking officer with Tracka, an organization tracking the implementation of government projects across Nigeria says the delay was because of the inability of the previous government in the state to pay its own counterpart fund to access UBEC grants.

Dauda visits Anchau and other communities in Kaduna state to organize town hall meetings and sensitize them about projects captured in the state so they can become aware, take ownership of the projects and follow up until the completion stages. 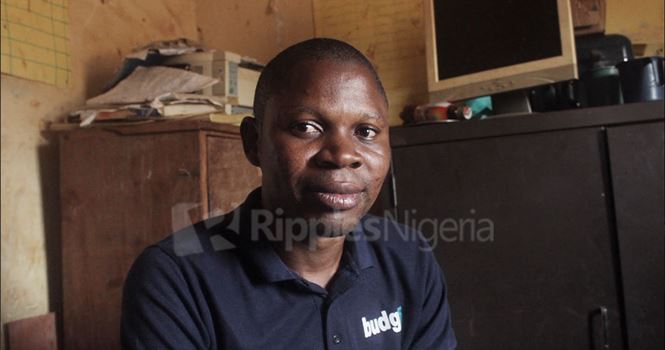 “The project was delayed before it was finally started last year and when they started, they rushed everything,” he said. “The present administration in the state came on board and paid some of the matching grant before money was released to them.

“This school serves as a legacy to this community as it is one of the first public schools,” said Yahaya Saleh Anchau, the chairman of the School Base Management Committee who interfaces with the government on the needs of the school. Every month, Anchau attends meetings with government education officials where they discuss how to run the affairs of the school.

“I normally talk about the situation of the school at the meetings,” Anchau said. “It is sad to see the school in this terrible condition without receiving the necessary attention it deserves.”

After visit, contractor returns to site

One week after a visit to the school by this reporter, the contractors returned to site to continue with the building project.

The site engineer at the project site, Daspan Ibi said they are back on the site now to complete the project. He said the project was abandoned because payment was yet to be made to the contractor. 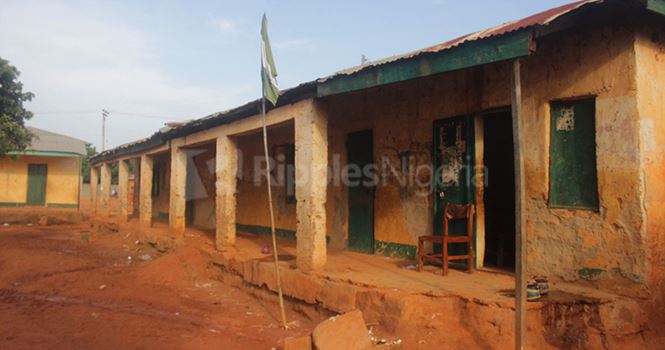 The old block of classrooms

“All our equipment are here now,” Daspan said. “We are back to start from where we stopped and we hope to complete it before the year comes to an end because the contractor called me and said it has to be completed urgently. I’m even there as we speak and from tomorrow, we will finish casting the iron for the next phase of the building.”

When asked to respond to protests by the community that the work done at the site was done with substandard materials, Daspan who has been working with the company for seven years now, agreed they received such complaints but said all these would be addressed in stages.

“You know when you are working on a project, you will have one issue or the other especially on finishing touches and all that. But we are still at the ground level stage now. When we complete to the last stage, then we will start the necessary adjustments and re-touching. It is not looking good now because it is still under construction. Even the principal complained and I explained to him that when we finish the project, he would appreciate our work,” he explained. 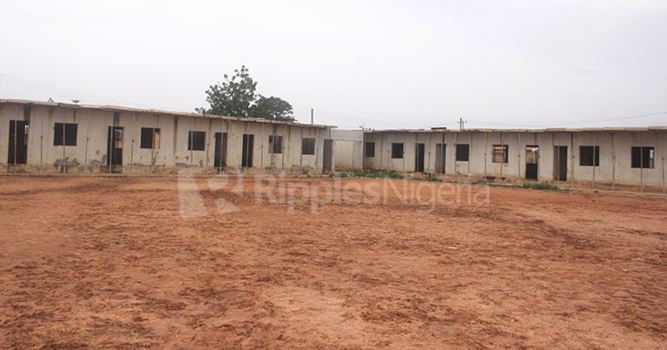 “Yes, I saw them last week,” Nasiru, said, confirming the return of the contractors. “I saw a crane and a mixer. They are doing some works at the site presently. They came the next week after you left here. Maybe somebody told them that someone came here to monitor the project.”

But Dauda who visits the community often to assess the project says that it won’t be possible for the project to be completed this year because there are still lots of work to be done and the contractor and his team would definitely be going on break for Christmas holidays.

“We want them to finish this building so that these children can have a conducive learning environment,” Goma says. “This will help solve the accommodation challenges.” 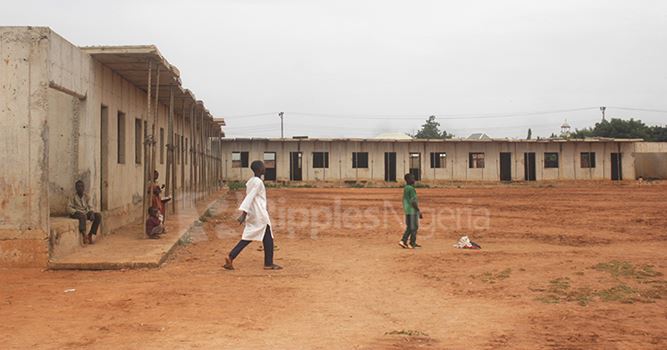 The school project which was awarded in 2016 and meant to be a two-storey building, is still at the ground level.

Last month, 20 new set of computers and solar powered generating set was donated to the school by UBEC. The news is exciting to Umar and his classmates. Now, they can access the Internet, learn new skills and read online instructional materials while waiting for the new classroom projects to be completed.

“I want to help my mother when I grow up,” Umar says running off to meet up with his friends in the field.