Many have seen the demolished building, but not many know the circumstances that led to the teardown of the about N3 billion property owned by Lagos-based real estate mogul, Olu Okeowo, the founder and chairman of Gibraltar Construction.

The godfather of real estate in Lagos has been in building and civil engineering construction since 1994, making the island and Ikoyi his fortress with the development of luxury homes like Palacio De Okeowo, Solomon Court, Adejoke’s Court, Abraham Court, Grace Court, amongst many others in Ikoyi.

The billionaire had silently been lording over the real estate market until one of his property under construction, Tumi’s Court, caught the attention of Ripples Nigeria on April 7, 2021 during an investigation into the looming environmental danger posed by indiscriminate reclamation of Lagos shoreline by some real estate investors. 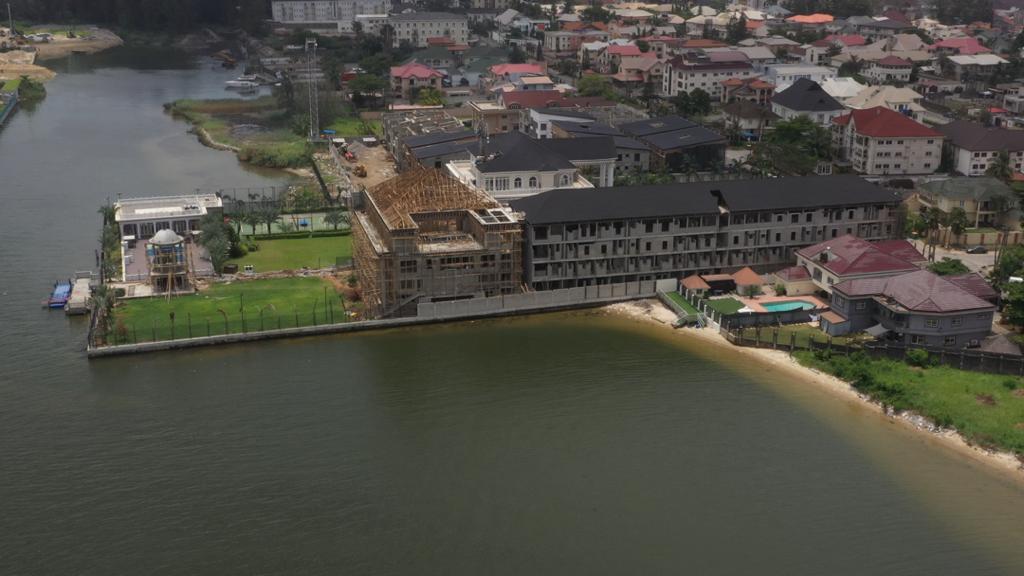 Located on Olusegun Aina Street, Parkview Estate in Ikoyi, Tumi’s Court is bordered by Gerrard Road and the Banana Island. It is situated just beside Okeowo’s Palacio De Okeowo property.

During a cursory probe of Parkview Estate, Ripples Nigeria had undertaken aerial shots of the properties in the area and the shoreline. It was noticed that Okeowo borrowed a page from the mega city masterplan of the state government.

One of his properties stood out, as he had engaged in land reclamation, which is an act of creating a land out of an ocean or stealing portion of a sea to situate property. That is what Okeowo did with Tumi’s Court. He dredged and sand filled a part of the sea to extend what was meant to be a luxury building.

Findings by Ripples Nigeria showed that the billionaire’s N120 million (3 bedroom)/N140 million (4 bed room) a flat multi-family building was the only property extended into the sea along the coastline in Parkview Estate.

The reclaimed part is occupied by a two storey building, with gardens, swimming pool and a tennis court, while using the waterside as a unique selling point to interested prospective buyers.

In the course of the investigation, Ripples Nigeria had reached out to the Lagos State Real Estate Regulatory Authority on April 9, 2021, to present its findings and confirm the role of the government in the construction of Tumi’s Court.

While enquiring if the state government gave license for such extention or approved the building plan, it was gathered that the construction was illegal.

According to the hotline call representative for the real estate regulator, Fanope Queen, the extension works may have been illegal and not approved by the government. At that time, LASRER was unaware of the structure taking up space in the sea.

Ripples Nigeria shared evidence of the building extension with LASRER upon request when another call was put to the regulator on April 16, 2021. On all occasions, Queen had stated that the head of the regulator was not available for comment.

When LASRER was contacted again for official comment on April 19, 2021, Queen gave the same unavailability response, but in a previous chat with her, she had said an investigation would be conducted if a petition was written.

But upon hearing that the purpose of the enquiry was for a media investigation, Queen promised on April 17, 2021, to get back to this media outlet, but she never did.

Four days after the last conversation, the Lagos State government used a bulldozer to demolish the structure which was expected to be completed in the second half of this year, according to findings during the building inspection.

The real estate mogul didn’t come up with the land reclamation idea on his own, he got the concept from the Lagos State government which has been involved in land fill activities for over three decades.

As Lagos State continued to experience housing deficits amid urban population explosion, the need to carve more lands to house its urbanisation growth became a masterplan regardless of the risk it posed to residents in the environment.

Both the government and its deep pocket real estate investors looked to the ocean for new settlement ground. The ambitious plan of the state government for a mega city outside the mainland led to the extension of land into the sea.

The development of the sea is witnessed in Ikoyi, Victoria Island and Lekki Peninsula environs. Now, the focus is on Eko Atlantic city, because land reclamation is a profitable business even though it has its dangers. 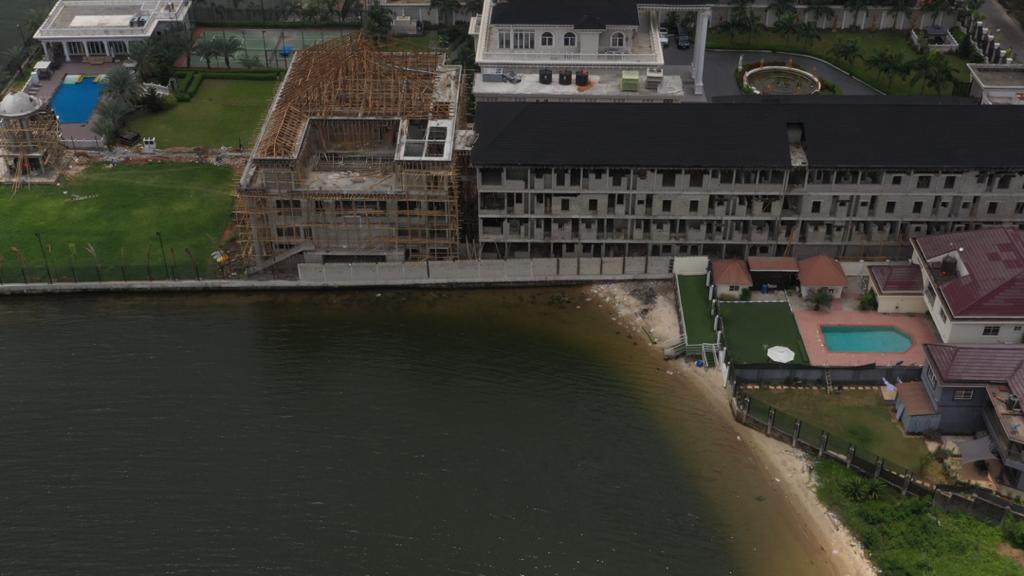 Land reclamation on the Island is the reason properties in Ikoyi, Lekki Peninsula, Victoria Island and Eko Atlantic City are prone to flood once its raining season, with property worth millions of naira over run by water.

The total cost of the reclamation over the years remain unavailable to the public, with only that of Eko Atlantic – which is 40 percent larger than Victoria Island – estimated at $6 billion according to ekoatlantic.com.

While structures could be seen erected across these highbrow areas, what is hidden to the public is the danger the quest poses to residents. Contractor of the Atlantic city, South Energyx, are betting on their wall and nine metres above sea level to withstand any fight back from nature.

The environment cost of land reclamation was perfectly summarised in a United Nations paper; Land/Sea Physical Interaction of 2016, “Land reclamation may destroy habitat and ecosystem services that protect the coast from sea-level-related hazards such as storm surge and tsunamis.”

While the Lagos State government may have clamped down on Okeowo, in response to Ripples Nigeria enquiries, the authorities are still encouraging land reclamation in other areas like Eko Atlantic, where the state has a vested interest.

It is, however, temporary relief for some residents of the highbrow estate who have lived with trepidation since the haphazard encroachment into the sea began at the Parkview end of the shoreline.

A resident who spoke under condition of anonymity said:

“We feel a sense of relief with the demolition of Tumi’s Court because there were many things wrong with the development.
“It was obvious some shady deals may have taken place because a genuine conduct of any Environmental Impact Assessment exercise would have revealed that the reclamation and subsequent property development portend a great danger to the environment.”

He added, “We commend Governor Sanwo-Olu and his administration for taking the bold step to stop an illegality and prove that no one is above the law.
“We urge him to finish up the demolition task as the partially destroyed property poses even greater danger to the ecosystem.”