Five years after a contractor abandoned a primary healthcare centre meant to serve a remote Kano community, the people tell Ripples Nigeria’s Linus Unah the agonies they endure daily, and how they hope government would live up to its responsibilities

When construction workers and equipment arrived Rumo village in late 2014, Sabo Abdullahi, the village head of this remote settlement in Sumaila local government area of Kano state, beamed with smiles.

The National Primary Health Care Development Agency (NPHCDA) had awarded a contract of ₦21,986,893.95 to Drumlyn Nig Ltd in 2014 to build a primary health care centre in Rumo.

Abdullahi, then 62, and other villagers had longed for a primary healthcare facility in their village to save them the cost of having to travel to Sumaila town – about 30-minutes away – when they needed to treat any serious illness.

They were tired of watching women in the village visit Sumaila town for antenatal care. 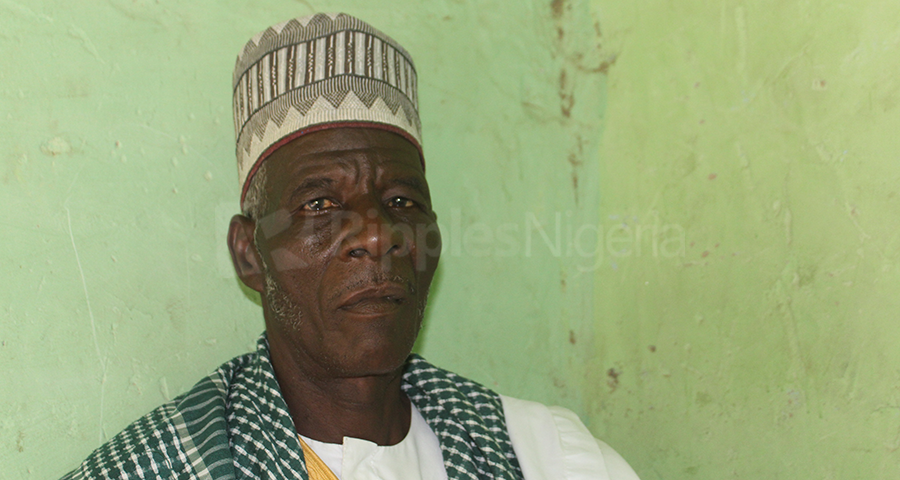 “We were very happy that the government was bringing a big hospital here,” the village head says, his back slumped over the walls in his home.

“Our women can now go and deliver babies there, and there will be a laboratory where doctors can test us when we are not feeling too well.”

He would visit the construction site regularly to see how the workers fared. And would, with anticipation, gaze over the materials on the ground: tonnes of sharp sand, hundreds of concrete hollow blocks, bags of cements, and steel rods.

As workers lay blocks to build walls out of the foundation, he could already picture a functional health facility that would result from this process.

Work continued on the site with intermittent stops in early 2015. By this time, the workers have fenced and roofed the facility, but there were no windows, doors, and the walls were still bare without plaster.

Then finally, in 2016, construction halted. 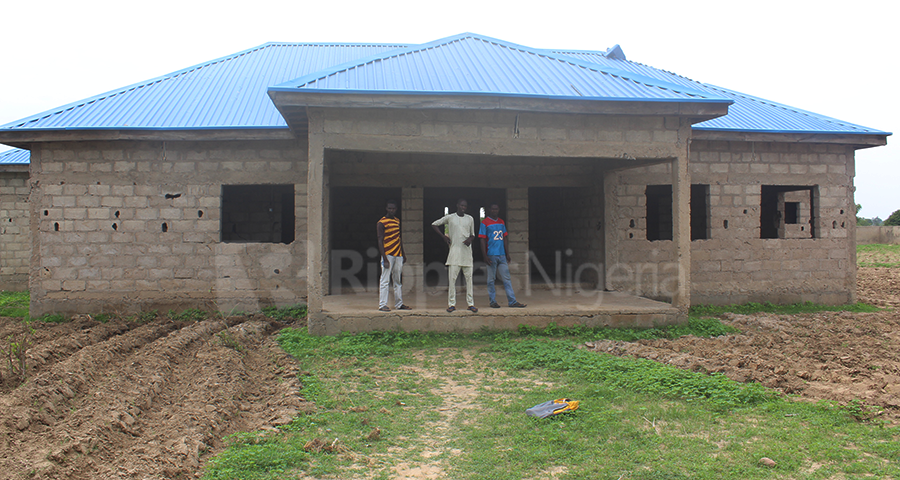 “When they started working here, everything was very fast, but all of a sudden work stopped because the contractor said he has not received his full money,” Abdullahi, 67, recalls.

The contractor, he said, promised to return to the village whenever he was completely paid. Construction workers left some of their tools – sand trays, water pump, masonry trowels, steel tapes, and digging spade — perhaps a sign that they were hanging on for work to continue.

Efforts to reach the contractor via texts and calls were futile.

For now, villagers in Rumo continue to watch and wait, clinging to the hope that one day work will resume again at the site.

Today, the facility is surrounded by patches of cattle-ploughed land full of ridges divided by open furrows. The sower planted soybeans there. The yet-to-be-completed health centre has a roof, a borehole at the back and seven rooms comprising a waiting hall, wards and offices. The steel sign board stand hanging over the fence, has been stripped of the contract details — title of contract, name of contractor, location and implementing agency.

Inside, the windowless rooms allow villagers to jump in and out at will. On the rough, unplastered cement floor, a few droppings of cows and goats sit alongside Whot cards, empty packs of Aspen cigarettes and a handful half-smoked cigarette with ashes by the side of the unlit tips.

On a hot evening in mid-June, just as the glow of the late afternoon sun caves in to the dim of nightfall, 25-year-old Abdullahi Muhammed drives to the site on his rickety, two-wheeled motorcycle.

Muhammed’s constant headshakes and sighs, mostly in anger and resignation, are indicative of the deep sense of disillusion among residents in Rumo village after the construction was stopped. The village is made up of about 270 households who are from Hausa and Fulani ethnic groups. Villagers tend to livestock and farm mainly rice, sorghum, maize, and pepper. 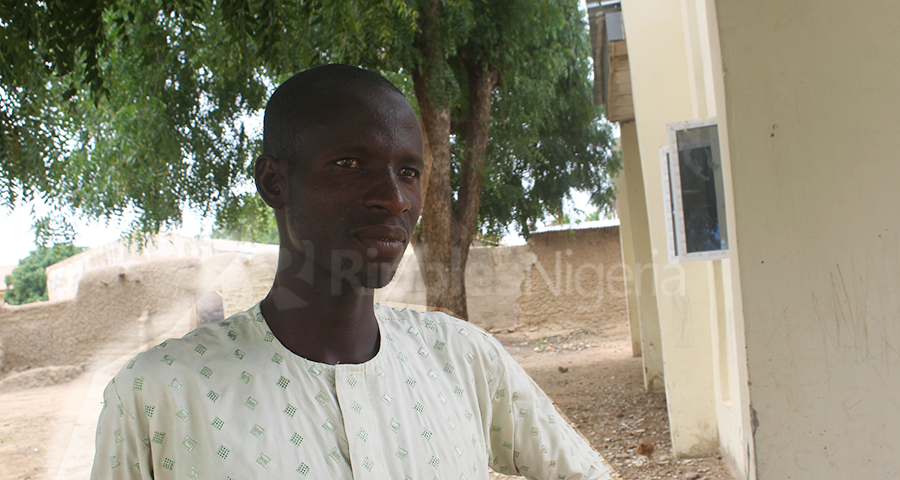 “I always call the contractor on phone to ask him to return and complete the work but nothing is yet to happen,” he says.

“We are suffering because we just have a health post that serves as a referral centre and only treats [minor] sicknesses like [mild] malaria or typhoid.”

The health post is the only facility that serves this remote settlement that can be accessed via a dust-blown track sandwiched by a large swathe of ploughed farms and mud homes with a mix of thatched and corrugated roofing.

Around five women, two of whom have babies strapped to their backs, are seated on wooden benches in the waiting room.

Drugs in plastic containers, mono cartons and blister packs are strewn on the table. Public health posters on infection prevention, immunization, hand and food hygiene, diarrhoea, measles, vaccination and how to use rapid diagnostic tests for malaria are tacked to the blue-coloured wall.

The health post caters to outpatients with uncomplicated or mild cases of malaria, typhoid fever, diarrhoea, jaundice and the like, says Suleiman.

He works with three other staff who combine forces to promote environmental health, food hygiene and fill referral forms for severe illnesses.

Suleiman complains that the health post cannot administer antenatal care, and lacks equipment, pointing to the palpation and antenatal care rooms which are completely empty and slightly dark. 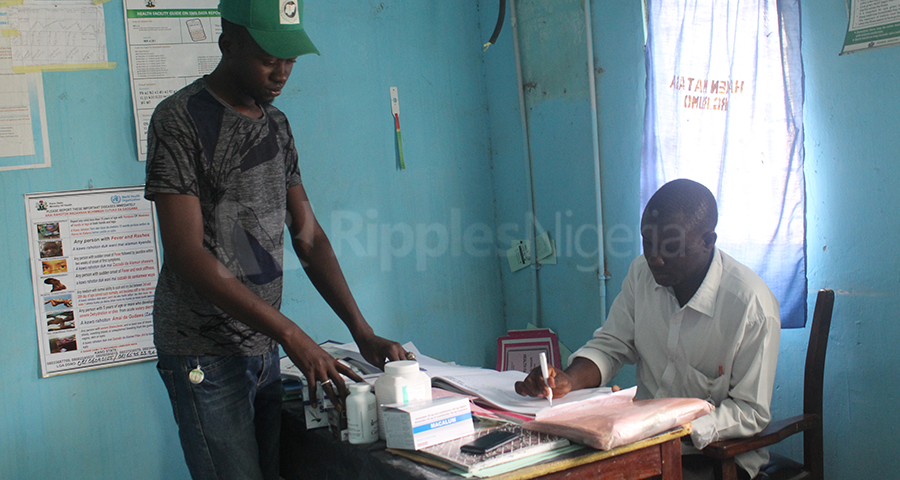 Community health workers at work in the health post in Rumo

When Aisha Inusa felt a cold sensation alongside bouts of body aches, headache and fever in late February, she visited this health post to get care.

The staff there told her the symptoms she presented were manifestations of malaria and typhoid fever — without any diagnostic confirmation — and recommended drugs.

Inusa, a mother of two, bought the drugs from a small store that sells drugs in the village, but said she did not feel any better after taking the medication.

She returned to the chemist’s shop and the operator visited her home and inserted intravenous drips into her veins.

“The way I was feeling was the same but the headache stopped,” she remembers. “The drip was even taking my blood from me.”

Angered by all the complications arising from her decision to receive treatment locally, 18-year-old Inusa paid 600 naira to a bike man to convey her to Sumaila town.

“It was at Sumaila general hospital that I got treated very well after I told them everything that happened,” she told Ripples Nigeria.

Poor care for women and children

By extension, pregnant women in Rumo have to spend up to 600 naira using motorcycles to get to the general hospital in Sumaila for antenatal care. And this applies to people who are grappling with severe complications of common illnesses like malaria, convulsions,and typhoid fever.

Throughout both of her pregnancies, Inusa had to go to Sumaila to get care and support. 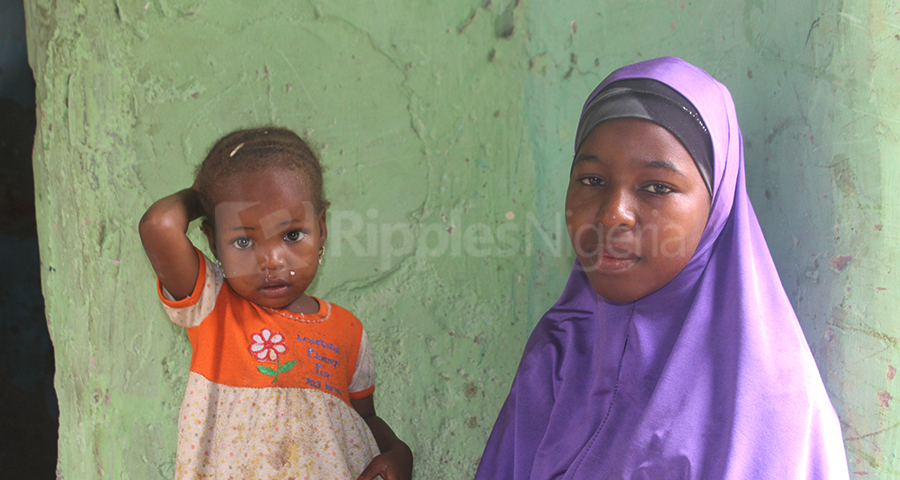 Aisha Inusa had to rely on Sumaila General Hospital during pregnancy

“Except there are [complications] during birth,” she says, “we just deliver at home because Sumaila is far and we cannot start finding ways to go there when we have labour pains.”

But Sabo Abdullahi worries that depending on Sumaila general hospital has affected some of his people.

“Sometimes so many people are not able to get to Sumaila when they have serious health problems and we have lost some villagers due to the absence of a primary health care centre,” he says.

The state government initially supplied a tricycle three years ago to convey patients referred to the general hospital in Sumaila, but after it broke down in February, patients have to cater for their transportation costs out of their pockets.

The lack of nearby quality pregnancy care services for women can have consequences for both the mother and the unborn baby’s health: Nigeria has a maternal mortality rate of 814 deaths per 100,000 live births, and the third-highest infant mortality rate in the world.

The World Health Organisation (WHO) recommends that women should have at least eight contacts with a health provider during pregnancy. This helps to ensure that women get access to the right care, support and information on nutrition, family planning, as well as disease detection and prevention.

A 2015 study published in BMC Pregnancy and Childbirth journal found that getting money (56.4%) and distance from pregnancy care providers (48.8%) were major barriers to about 48.8% of 2,199 women who did not use antenatal care services but had at least one child within five years before the 2012 National HIV/AIDS and Reproductive Health Survey was conducted.

Lack of transport facilities was the third major barrier, affecting 44.1% of the women who didn’t attend antenatal care.

Eliminating these barriers, argued the authors, could increase antenatal care coverage in Nigeria by over 15%.

If women have access to quality antenatal care services throughout their pregnancy, the WHO reasons, it will reduce the likelihood of stillbirths. 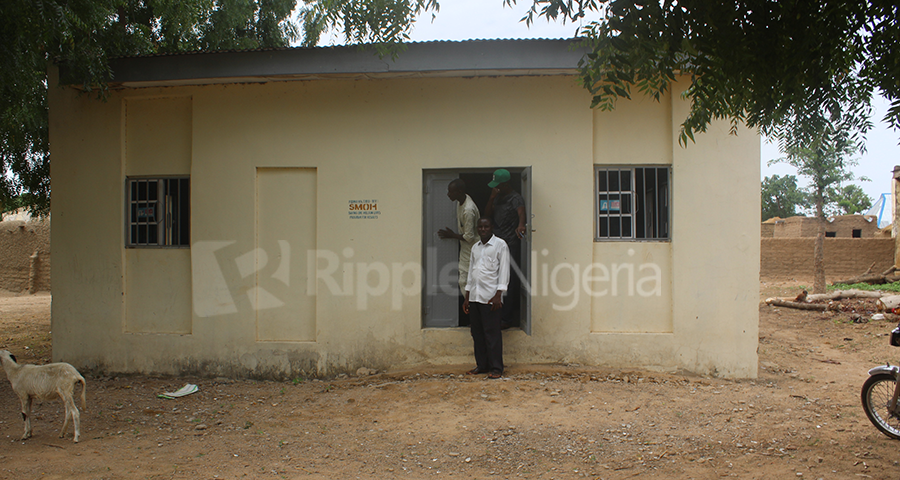 This health post is the only facility that serves Rumo settlement

Every time she walks past the abandoned health centre, Inusa pins her hopes on the contractor and prays that the firm returns to finish the project so that villagers in Rumo can have the right care.

“If the hospital is completed, it will reduce transport costs and help us during emergency situations,” she says, calling out to her two-year-old son not to stray out of her watch.

“There will be a laboratory to help people know what exactly is happening to them, and we wouldn’t have to go all the way to Sumaila anymore.”